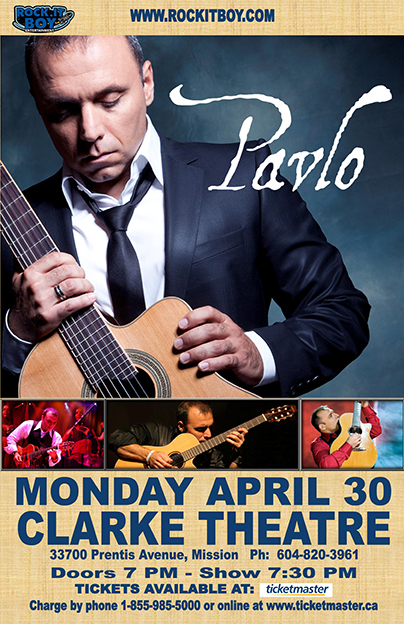 “Have the courage to do what you love, and the drive to do it well.”

Rock.It Boy Entertainment proudly presents PAVLO with guests LUKE MCMMASTER on Monday, April 30 at the Clarke Theatre (604-820-3961) in Mission. Advance tickets are on sale for $34.50 (Plus Facility Fees & Service Charges) at all Ticketmaster locations, by phone 1-885-985-5000 or online at www.ticketmaster.ca.

Celebrating the release of his ninth album Six String Blvd – in stores Feb 7 – Pavlo is making a stop in Mission as part of his “Six String Blvd World Tour”. This Greek-Canadian musician and composer is the most successful independent artist to come out of Canada, performing more than 150 shows per year.

With two gold albums, Pavlo and Fantasia, PAVLO has sold over half a million records worldwide. His PBS Special, Pavlo: Mediterranean Nights airs nationally on CBC Bold and Bravo. PAVLO has a long list of credentials including World Artist of the Year (2005), Touring Artist of the Year (2006) and a nomination at the Juno’s for Best Instrumental Album of the Year (2000). Plus, his music was featured on, “Marine Life”, “The Chris Isaak Show” and “The L Word” to name a few.

As strong as his dedication to his craft, is his dedication to children. PAVLO is a spokesperson for World Vision, embracing their way of empowering women, infusing confidence in young children and aiding those in need without stepping on their dignity or personal beliefs. Through his concerts, he has helped sponsor over 700 children to date. In addition, PAVLO is the North American Spokesperson for Batten Disease Awareness, a rare and always fatal degenerative brain disease that affects children.

Ever the giver, PAVLO is known for gifting his guitar to someone in the audience at every concert. In Mission, this could be you. This will be a stirring night of music and dance. Don’t miss the fabulous Greek God of Guitar, PAVLO, as he comes to the Clarke Theatre in Mission.

For more information on this great artist, please visit www.pavlo.net.

In 1997, LUKE MCMASTER met Rob James and together, wrote “Shouldn’t Love You”, then decided to team up. Under their new name, McMaster & James they released the hits, “Love Wins Everytime”, “Thank You”, awarded the SOCAN award for Top Radio Play (2001) “I Understand”, winning the Prairie Music Award for Best Song (2001)and “Sweet Sensation”. McMaster and James also earned the Prairie Music Award for Performers of the Year (2001).
In January 2008, LUKE MCMASTER released “All I’m Missing Is You”; “Time”; “Running”; Can’t Get Enough Of You” and “I’m At Your Mercy”, all chosen to reflect Luke’s influence by the Blue Eyed Soul music genre. Eclectic & soulful, LUKE MCMASTER is a perfect addition to the show.