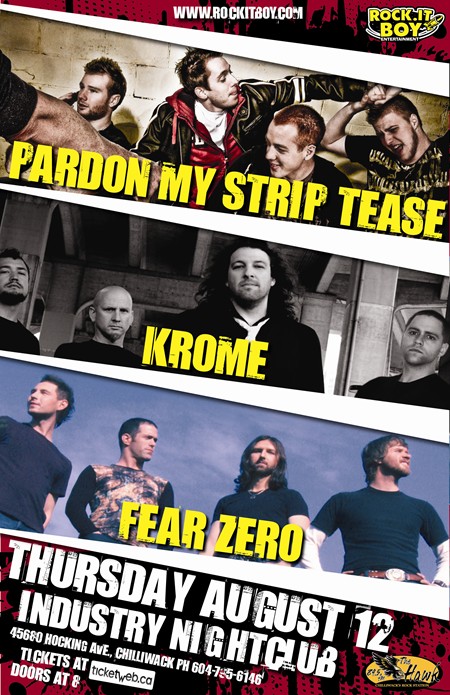 PARDON MY STRIPTEASE with KROME  and FEAR ZERO

The heat of mid-summer is no match for the burning intensity of a Rock Solid Triple Bill as Rock.It Boy Entertainment and 89.5 THE HAWK present PARDON MY STRIPTEASE with KROME and FEAR ZERO in concert Thursday, August 12th at the Industry Nightclub on Hocking Ave. in Chilliwack.  Advance tickets are on sale for $15 (plus Service Charges) online at www.ticketweb.ca or $20 at the door. The Fraser Valley keeps pumping out the best in new North American rock music.  Now, representing  the town of Sardis, BC we have PARDON MY STRIPTEASE (also known as PMS), a four-man west coast song writing groove-machine, fronted by vocalist Andrew Putt, that has been rocking stages all over the Fraser Valley and the Lower Mainland for almost two years now.  Formerly known as “ The Brink,” PARDON MY STRIPTEASE has had considerable airplay in the valley, due to rabid fan support and, with their debut album just completed at Factory Studios in Vancouver, they are poised to take on the world. You know you’re in for an amazing show when you sign up to see KROME, a band that has already performed more than 300 concerts from coast-to-coast. The road has been good to KROME.  Logging countless hours of van time and stage experience, the band has found themselves veterans of the highway and leaders of a new resurgence of independent touring bands.  KROME‘s “Turn It Up” was the #2 most played song in 2009 behind Kings Of Leon on Galaxy Rock Radio Canada, while spending 29 weeks on Canada’s national rock radio chart.  Their loyal fans know they can always expect the best in hard rock from KROME. Vancouver-based FEAR ZERO’s new album Whole Damn Nation shows the range and depth of the group, incorporating a wide variety of styles from hard rock to simple pop to reggae. See them bring that dynamic to the stage as part of the Rock Solid Triple Bill featuring PARDON MY STRIPTEASE along with KROME and FEAR ZERO in concert on Thursday, August 12th at the Industry Nightclub located at 45680 Hocking Ave in Chilliwack (Phone 604-795-6146). Advance tickets are available for $15 (plus Service Charges) from Ticketweb (online at www.ticketweb.ca) or $20 at the door. Doors open at 8pm.