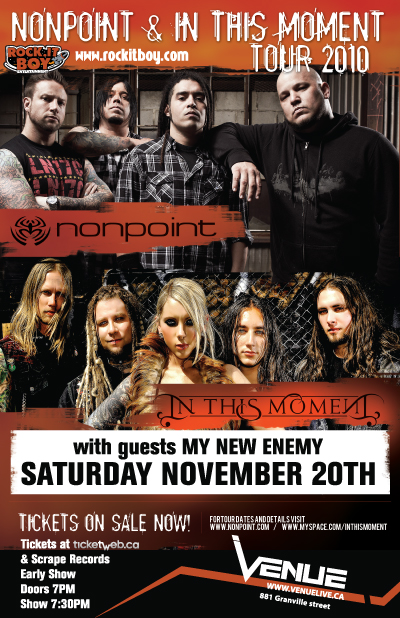 NONPOINT, IN THIS MOMENT and MY NEW ENEMY

In This Moment, My New Enemy

NONPOINT, IN THIS MOMENT, MY NEW ENEMY

Tickets on sale $18.50 (plus Service Charges) at Ticketweb.ca

The suns sets early here in the north.  We rock….hard at 7:30PM. Rock.It Boy Entertainment presents the beating metal heart of Fort Lauderdale, Florida, the amazing NONPOINT with revered guests, from Los Angeles California, IN THIS MOMENT plus the hardcore  Fraser Valley sound of local boys MY NEW ENEMY in an early concert at 7:30PM on Saturday, November 20th at VENUE on  Granville Street in Vancouver.  Tickets are on sale for $18.50 (plus Service Charges) online at Ticketweb.ca or from the lovely staff at Scrape Records at 323 East Broadway in Vancouver. Singer Elias Soriano sums up a up a NONPOINT concert – “Our live shows are pure chaos, screaming kids with smiles on their faces, non-stop crowd surfing. We have a great relationship with our fans.”  The power that is NONPOINT just keeps growing.  Earlier this year they released their eighth studio album Miracle (featuring the single of the same name) on 954 Records, which debuted at #6 on the Billboard Hard Rock Charts and did similarly well on all the other charts.  What started as a rabid NONPOINT following in Florida in 1999 with the debut album Struggle (Jugular Records) and on to the major label debut with Statement (MCA Records 2000) has now become a rabid world-wide following. Another monster metal magnet that is gathering fans and accolades like so many iron filings is the amazing IN THIS MOMENT, a project set in motion by guitarist/writer Chris Howarth and frontwoman Maria Brink, also known as the Hottest Chick in Metal, but don’t let that distract you boys and girls, it only adds to the power of this deeply melodic, heavy  band.  IN THIS MOMENT has just released their third album A Star Crossed Wasteland (Century Music 2010), a dark and powerful album that has crashed all kinds of charts and pushed the band the top of the competitive metal world.  You don’t want to miss this bill. Fraser valley five-piece MY NEW ENEMY is already well known to local hardcore aficionados and party monsters as they have become a popular and solid addiction to the most intense concerts around Vancouver Kick off your Saturday night with a big dose of metal mania when Rock.It Boy Entertainment presents NON POINT with special guests IN THIS MOMENT, MY NEW ENEMY on Saturday, November 20th at VENUE located at 881 Granville Street in Vancouver. Tickets are on sale for $18.50 (plus service Charges) online at Ticketweb.ca or at Scrape Records at 323 East Broadway in Vancouver (604-877-1676).  Doors open at 7PM and the concert begins at 7:30PM.