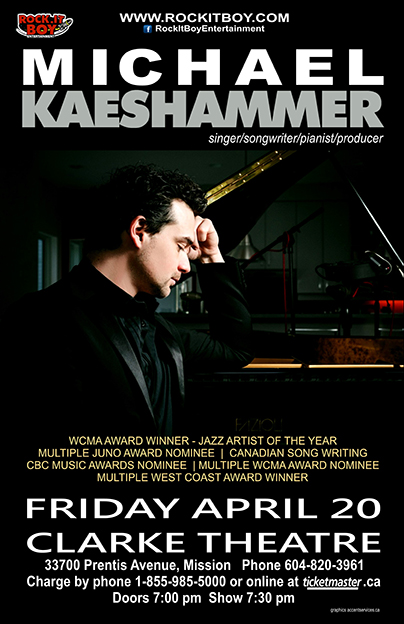 The Clarke Theatre in Mission Friday, April 20.
Tickets are $37.50(Plus Facility Fee & Service Charge) at all Ticketmaster locations.
Charge by phone at 1-855-955-5000 or online at www.ticketmaster.ca.

Rock.It Boy Entertainment presents MICHAEL KAESHAMMER on Friday, April 20 at the Clarke Theatre, 33700 Prentis Avenue, Mission. Tickets are $37.50 (Plus Facility Fee & Service Charge) available at all Ticketmaster locations. Charge by phone at 1-855-955-5000 or online at www.ticketmaster.ca.

The prolific Vancouver Island-based MICHAEL KAESHAMMER has earned a loyal international following as a triple threat. He’s a piano virtuoso with a technical mastery of many different styles, an eloquent singer/songwriter as well as a charming and engaging performer.

No Filter, a mix of well-crafted and melodic original songs with a couple of evocative piano instrumentals, is the eleventh album from MICHAEL KAESHAMMER. This is the sound of an artist following his muse completely unhindered by thoughts of commercial imperatives or genre constraints. On this album Kaeshammer has completely come to terms with his eclectic taste.

On No Filter, Michael takes the listener on a highly entertaining journey through refreshingly diverse musical terrain. It begins with “Letter From the Road”, a buoyant and upbeat romp with exuberant horns and Michael in top boogie-woogie form. “Nothing Seems To Reach You” has rich dynamics via the combination of horns, organ and backing vocals, showcasing Michael’s smooth, soulful voice. “Everybody Catches Love Sometime”, a co-write with James Bryan (Philosopher Kings), is a tender treat featuring sweet lyrics boosted by Randy Bachman’s typically fluent guitar work. Another highlight of the album is “Late Night Train” with Michael’s lyrical piano complementing the honeyed voice of Denzal Sinclaire. The album also features a couple of instrumentals, the jaunty “Westcoast Spirit” and the mellow album closer, “Sunset”.

Kaeshammer wrote these new songs at home, arranged and recorded them in demo form, then had them fleshed out in the studio by his A-list touring band that comprises bassist Devon Henderson, drummer Roger Travassos, trumpeter William Sperandei, tenor saxophonist Chris Gale, and trombonist William Carn. The personal and musical empathy of this group is certainly audible on No Filter.

MICHAEL KAESHAMMER is now eager to add some of the material from No Filter to his live set list. Touring is a major component of his career. His well-honed skills as a performer have placed him in real demand; in Canada, headlining the prestigious Massey Hall and Koerner Hall in Toronto and the National Arts Centre in Ottawa; regular performances in Europe and five tours in China including playing at Canada House during the Beijing Olympics.

Last year’s album The Pianist attracted enthusiastic reviews and was recently nominated for a Western Canadian Music Award. Kaeshammer has won previous WCMAs for Jazz Artist of The Year (2017), Musician of the Year and Entertainer of the Year, while seven Juno Award nominations have netted him two wins. With a recording career now spanning two full decades, MICHAEL KAESHAMMER has emerged as a truly original artist at the very top of his game.