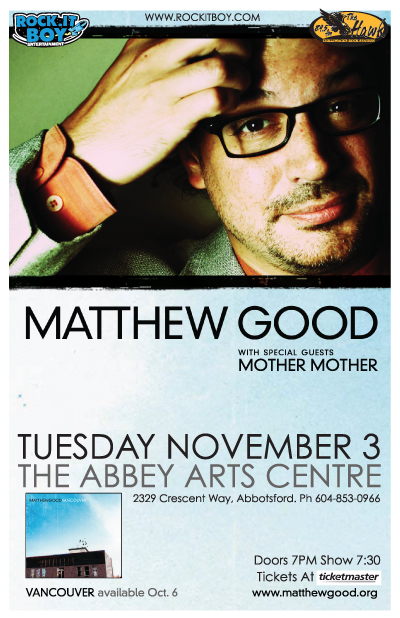 MATTHEW GOOD AND HIS BAND WITH SPECIAL GUESTS MOTHER MOTHER

MATTHEW GOOD AND HIS BAND

Advance tickets $39.50 (plus Service Charges) at all Ticketmaster outlets

89.5 The Hawk and Rock.It Boy Entertainment are pleased to present MATTHEW GOOD AND HIS BAND in concert on Tuesday, November 3rd at the Abbey Arts Centre in Abbotsford.  Advance tickets are on sale for $39.50 (plus Service Charges) at all Ticketmaster outlets. MATTHEW GOOD still has the goods.  The rocking goods, the insistent plaintive voice paired with incisive lyrical content.  The melody,  the beat,  the hit song.  Just take a listen to ‘The Last Parade’ which is the first single from his latest album Vancouver (Universal Music) which will be released in October this year, and you‘ll hear that Matthew has returned to the powerful rock music that heralded his success back in the 90’s. One of the most successful Canadian alternative bands, the MATTHEW GOOD BAND stormed onto the scene from the wilds of Coquitlam with their debut album in 1995 and  delivered hits like “Alabama Motel Room,” “Symbolistic White Walls,” “Haven’t Slept in Years,” “Everything is Automatic” and “Apparitions.”  Five albums later, in 2002, after gold and platinum awards, fourteen Juno nominations and a sometimes combative relationship with the media, Matthew broke up the band and embarked on a solo career. Vancouver is the fifth solo studio album by MATTHEW GOOD, who has also found the time to make a name for himself as a published author and a blogger on his website www.matthewgood.org.  A tireless social activist, Matthew is very open about his mental ups and downs dealing a bi-polar disorder and is an advocate for the Canadian Mental Health Association, the Rideau Institute’s Ceasefire initiative and an ardent supporter of Amnesty International. Revisit the powerful hits and experience new and exciting songs as Rock.It Boy Entertainment presents MATTHEW GOOD in concert on Tuesday, November 3rd at the Abbey Arts Centre, 2329 Crescent Way in Abbotsford (604-853 0966). Tickets are on sale for $39.50 (plus Service Charges) at all Ticketmaster outlets (online at www.ticketmaster.ca or charge–by-phone at 604-280-4444). The doors open at 7:00PM with the show starting at 7:30PM.