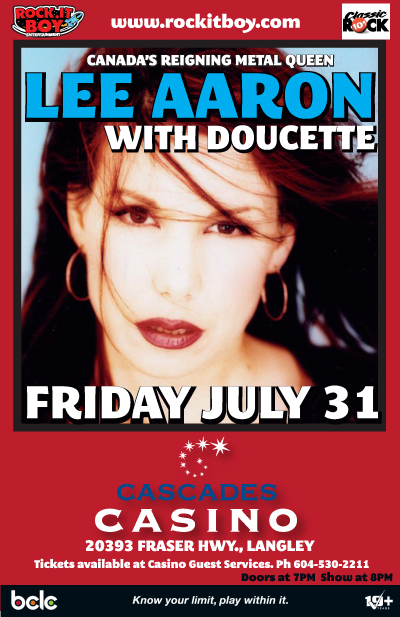 Tickets  on sale for $32.50 (plus GST and Service charges) from Casino Guest Services

Rock 101 and Rock.It Boy Entertainment are proud to present the magnificent LEE AARON in concert with DOUCETTE on Friday, July 31st in the Cascades Casino Summit Theatre in Langley. Tickets go on sale for $32.50 (plus GST and service charges) on June 26th at Casino Guest Services

LEE AARON is a woman who likes to control her own destiny.  Born Karen Greening in Ontario, she joined a band called Lee Aaron on ‘backup vocals and keyboard,’ and ended up as the main singer and then adopted the band’s name as hers. Just for starters. Then she took over rock and roll and drove the boys and girls of the MTV/Muchmusic generation totally bonkers.

Her debut album The Lee Aaron Project (1982) established her as a powerful force on the rock scene but also placed a lot of emphasis her a sexy pin up girl.  After two albums she took control of the image and put the emphasis on the hard rock and became the undisputed Queen of Canadian Metal, using the cream of Canada’s rock musicians, and leaving a trail of great rock albums like Metal Queen(1985), Bodyrock(1989), Call of the Wild(1985) and Some Girls Do(1991).

In the early nineties she took a break from the hard rock scene, moved to Vancouver and got together with three guys from the Sons of Freedom, releasing an alternative/hard pop album called 2precious and then she took a long break.  LEE AARON blew everybody’s minds when she once again cracked her career stereotype and returned as a jazz vocalist with the album Slick Chick in 2000 and totally reinforced the new direction with her 2004 release Beautiful Things. She has done it all, but she’s not done yet!

DOUCETTE features the big man Jerry Doucette who gave us the rollicking guitar classic “Mama Let Him Play” in 1977, from the album of the same name –  a song that ruled the FM airwaves as a flagship for freedom, independence and the right to party your face off eloquently framed with one of the great guitar solos of the time.  That album went platinum and a few more good ones followed including The Douce Is Loose (1979).  He continues to deliver slick guitar and powerful songs with dedication and passion and is undeniably one of Canada’s great guitar men.

Rock 101 and Rock.It Boy Entertainment are  proud to present her magnificent self LEE AARON in concert with special guest DOUCETTE on Friday, July 31st in the Cascades Casino Summit Theatre located at 20393 Fraser Highway in Langley (604 530 2211).  Advance tickets are available for $32.50 (plus GST and service charges and a whole bunch of good times) from Casino Guest Services or at the door.  Doors open at 7PM.  Show at 8PM.