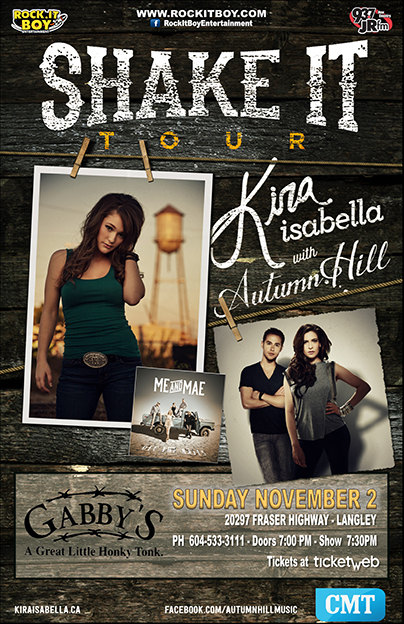 Come out and shake it!
KIRA ISABELLA
with
AUTUMN HILL
And special guests
ME & MAE

Rock.It Boy Entertainment and New Country JRFM 93.7 present KIRA ISABELLA with AUTUMN HILL and ME & MAE Sunday, November 2 at Gabby’s Country Cabaret, 20297 Fraser Highway, Langley. Tickets are $30.00 (plus Service Charges) at TicketWeb. Charge by phone at 1-888-222-6608 or online at www.ticketweb.ca.

A prolific singer and songwriter, KIRA ISABELLA has spent literally half her life performing her brand of up-tempo country music across Canada; an impressive feat at just 20 years old. With a fervent passion for belting out any song, she has been unstoppable since her first recital at the age of seven. Her charming stage presence, bubbly personality and natural talents led her to win nearly every competition within driving distance from her hometown.

Kira’s first single “Love Me Like That” was a runaway hit crossing over into the Canadian Hot 100 Chart while earning a Canadian Radio Music Award in the Country Category at Canadian Music Week (2012). The track “A Little More Work” quickly climbed up the charts with its catchy melody and infectious hooks becoming another hit for the young artist. Her debut album “Love Me Like That” was released to critical acclaim.

All that hard work has been well rewarded with a Canadian Country Music Award for Rising Star (2012), a nomination for a JUNO Award in the Breakthrough Artist Category (2013) and a win for CCMA Female Artist of the Year (2013). Having performed with Country stars Jessie Farrell, Aaron Pritchett and Gord Bamford in addition to select dates on Carrie Underwood’s Blown Away Tour (2012), Kira’s has arrived on the country music scene and she is here to stay!

Some songs grab you right away, while others sink in over time and won’t let you go. AUTUMN HILL’s music does both. On their debut album, “Favourite Mistake”, Tareya Green and Mike Robins tell compelling stories of loss and love from two distinct perspectives. In Addition to the title track the intimate “Battle Scars,” shows off their voices’ uncanny blend, and others, like the guitar-driven “Fire” sparkle with spirited energy. The singles “Anything at All” and “Can’t Keep Waiting” have found favour on country and pop radio alike. Each song resembles a short film, with vivid imagery, effortlessly catchy choruses, and passionate harmonies with a surprising depth.

Tareya and Mike took very different roads towards an unexpected common goal. Mike grew up listening to his father’s classic-rock collection and decided he wanted to be Jimi Hendrix. Eventually his axe skills landed him a spot in backing up singer/songwriter Hope on a yearlong tour through North America and Europe (2010). Meanwhile, Tareya was developing websites for famous entertainers, and feeling like “she was on the wrong side of the glass.” In time both found their way to Wax Records in Toronto. The pair found instant chemistry; there and then, AUTUMN HILL was born, and ever since, Tareya and Mike have been musically inseparable. Their album is the result of numerous trips to Nashville, working with a who’s who of local songwriters, and recording with producer Dave Thomson (Lights, Kalan Porter, Tyler Kyte) at the legendary Blackbird Studios. The nine tracks on “Favourite Mistake” reveal new layers to Autumn Hill’s talents, and prove once and for all that opposites do attract.

ME & MAE is Shawn Meehan and Jacky Mae, who, with a little serendipity and an abundance of talent have found themselves BC’s newest Country stars. The band has forged a reputation as the one to watch on the Canadian Country Music scene. The band’s debut album Off the Rails, released in May, features the singles “Love Me, Leave Me Lonely” co-written by Carly Rae Jepsen, the foot-stomping party anthem “Tailgate Party” and the sassy, sexy romp “What Cha Wearin’” as well as original covers of the Johnny Cash classic “Ring of Fire” and Dolly Parton’s peppy “9 to 5”. The album is a testament to Me and Mae’s ability to write songs featuring memorable vocal and melodic hooks incorporating a variety of styles to keep the material cutting edge and current, but still very original.

With a very focused and independent spirit ME & MAE is a on the road spreading their high-energy sound to fans throughout the heartland of country music. With momentum, talent and timing on their side, Me and Mae is poised to win over legions of fans looking for good, homegrown country music with a rock and roll sensibility and an ability to make folks want to dance, sing and perhaps even indulge in some enthusiastic texting.

For more information about ME & MAE visit www.meandmae.com