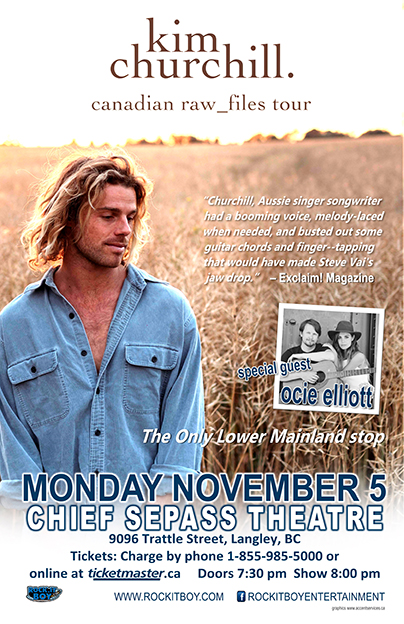 Monday, November 5 at the Chief Sepass Theatre, 9096 Trattle Street, Fort Langley.
Tickets are $25.00 (Plus Facility Fee & Service Charges) at all Ticketmaster locations.
Charge by phone at 1-855-955-5000 or online at www.ticketmaster.ca.

THE ONLY LOWER MAINLAND STOP

Rock.It Boy Entertainment is proud to announce that Special Guest OCIE ELLIOTT will join the KIM CHURCHILL: CANADIAN RAW_FILES TOUR concert on Monday, November 5 at the Chief Sepass Theatre in Fort Langley. Tickets are $25.00 (Plus Facility Fees & Service Charges) available at all Ticketmaster locations. Charge by phone at 1-855-955-5000 or online at www.ticketmaster.ca.

Hailing from New South Wales, soft-spoken KIM CHURCHILL seems the archetypal blond, blue-eyed surfer, but his laidback demeanour hides a secret; he’s an extreme risk-taker. Having spent 18 months working on the follow-up to his breakout LP Silence/Win (2014) with release plans in place and promotion offers from around the world, Churchill decided at the last minute to throw it all out and start again. He wrote a second version of the album in one frenetic week, then spent two months piecing together the new recordings with ARIA-winning producer Ian Pritchett in a garage in Western Sydney. The resulting LP, Weight_Falls, is a kaleidoscopic collection that is bound to take both fans and critics by surprise. This album is set apart from his previous releases by its sense of adventure and unpredictability, characterised by chopped-up drum samples, unusual harmonies and moments of disarming lyrical honesty.

Those familiar with Churchill’s radio smash “Window to The Sky”, which reached number 42 in Triple J’s Hottest 100 in 2014, will recognise signature elements in these new recordings: intricate guitar work, intuitive vocal melodies and a wonderful feeling of space and warmth. New single “Second Hand Car” is immediately identifiable as Churchill’s with its retro keys, propulsive guitar line and rousing chant-a-long chorus. On “Heart of You”, Churchill pairs a sinister guitar line with propulsive hand claps before introducing a monstrous chorus that locks in perfectly. Later, on the delicate “Rosemary”, he ruminates on love and death against a guitar/strings backdrop that rises and falls like ocean waves.

If there’s a common thread tying Weight_Falls together, it’s Churchill’s self-belief. Whether he’s blazing through a distorted guitar solo or harmonising with himself over feather-light instrumentation, there’s a sense that this music, this album, is authentic. Ultimately, he hopes, it’s that authenticity that will secure his place as an artist to remember.

“I just want to write music to entertain and to move people and to be the soundtrack to their lives,” he says. “I want to become a figure in the world that helps people see that it’s all ok, and the world is what it is – the best and worst parts of it.”

This is his only lower mainland stop on this tour, so get your tickets early to avoid disappointment.

OCIE ELLIOTT is musical duo Jon Middleton and Sierra Lundy from Victoria, B.C. The two met playing music at a festival on the small, wind-swept Salt Spring Island, where their love of music and the chemistry of their voices fostered an instant connection. Jon and Sierra’s voices meld beautifully in a cascade of sound, described by one reviewer as “…the aural equivalent of indigo painted skies and the first summer stars.” Their unique blend of contemporary and indie folk music is influenced by artists such as Gillian Welch, Simon & Garfunkel and Angus and Julia Stone, and born of the natural landscape of Canada’s wild west coast. In October 2017, they released their first EP, “Ocie Elliott”, to the world. The album was recorded in the woods of Vancouver Island, and immediately attracted an international following. Since then, they’ve opened for the likes of Mason Jennings, Joshua Hyslop and Current Swell. OCIE ELLIOTT will have another EP available soon!

Find the video for the wildly popular “Down by the Water” at: www.youtube.com/watch?v=DaWI3tpi358.