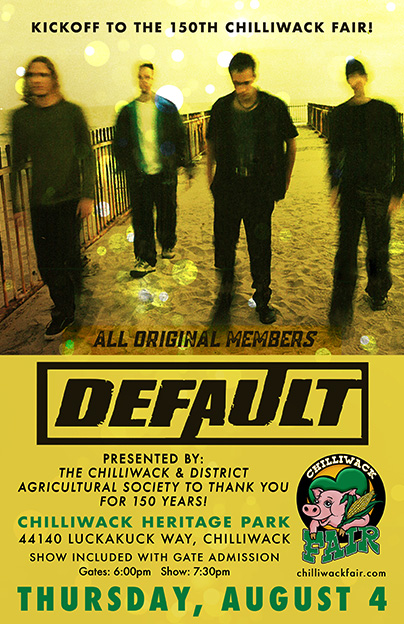 KICKOFF TO THE 150th CHILLIWACK FAIR WITH DEFAULT

KICK OFF THE 150TH CHILLIWACK FAIR!

Presented by The Chilliwack & District Agricultural Society.
Thank you for 150 Years!

DEFAULT, a Canadian hard rock/post-grunge band, was founded in Vancouver in 1999. Since forming, the multi-platinum band has released four albums and sold millions of records. Their debut album “The Fallout” (2001) achieved instant success with smash hits “Wasting My Time” and “Deny”. The album “One Thing Remains” (2005) produced the band’s third slam-dunk hit “It Only Hurts”. In addition, DEFAULT took home the Juno Award for “Best New Group” (2002). Between 1996 and 2016, DEFAULT was among the top 150 best-selling Canadian artists in Canada and among the top 50 selling Canadian bands in Canada.

Despite the band’s lead singer, Dallas Smith going on to have a record-setting career in country music, you will still find DEFAULT bringing their hard-rocking music to your town. Most recently, the band completed a cross-Canada tour with Stone Temple Pilots.

For more about DEFAULT visit: defaultband.com.