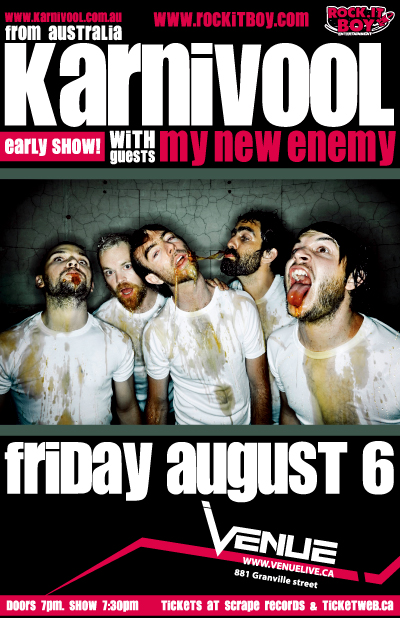 KARNIVOOL WITH GUESTS MY NEW ENEMY

IN CONCERT with guests MY NEW ENEMY

Advance Tickets on sale for $15 (plus Service Charges) at Scrape Records or online at www.ticketweb.ca

Get on the wave of the next big export from Australia’s shores. Rock.It Boy Entertainment presents KARNIVOOL in concert with special guests MY NEW ENEMY in an early show at 7:30PM on Friday, August 6th at Venue Nightclub on Granville Street in Vancouver.  Advance tickets are on sale for $15 (plus Service Charges) at Scrape Records or online at www.ticketweb.ca After conquering their home country with their red hot brand of Aussie alternative rock, KARNIVOOL continue their quest to take on the world. In the last three years KARNIVOOL, originally from Perth, Australia, has taken ‘Down Under’ by storm.  They have racked up an impressive number of Western Australia Music Industry Awards including “Most Popular Live Act”, “Best Male Vocalist”, “Best Guitarist” and “Best Hard Rock Act”.  This was in recognition of their first full-length album Themata, which was described by influential Kerrang! magazine as “a ten-track journey of soaring melody.” Their latest album Sound Awake was released last summer in Australia and immediately soared to the top of the charts there.  KARNIVOOL spent the rest of the year on a tour of sold-out concerts throughout Australia followed by their first tour of the US.  Sound Awake was released in North America just this past February, and the band has split its time between touring US hot spots such as the SXSW Festival with more sold-out headlining concerts back home. KARNIVOOL bring its Aussie-rules alternative rock/progressive metal to Vancouver, joined one of Vancouver’s heaviest metal bands, MY NEW ENEMY for a special early concert on Friday, August 6th at Venue Nightclub, located at 881 Granville St. in Vancouver. Tickets are on sale for $15 (plus Service Charges) at Scrape Records or online at www.ticketweb.ca Doors open at 7:00PM. Show at 7:30PM