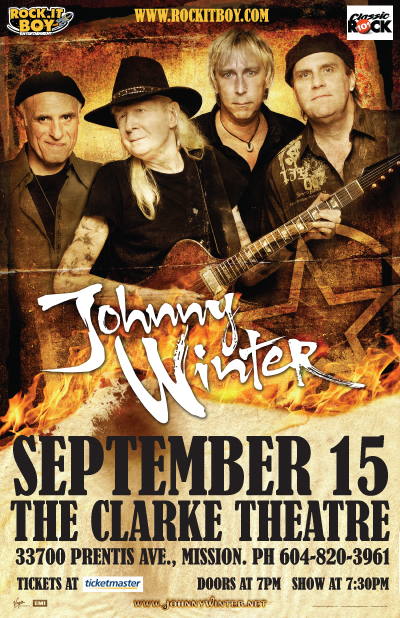 Tickets on sale Saturday July 10th for $45.50 (plus Facility Fee and Service Charges) at all Ticketmaster outlets.

Rock 101 and Rock.It Boy Entertainment in association with High Tide Entertainment are proud to present legendary blues singer, guitarist, and producer JOHNNY WINTER in concert with special guest DAVID GOGO on Saturday, September 15th at the Clarke Theatre in Mission.  Tickets are on sale Saturday July 10th for $45.50 (plus Facility Fee and Service Charges) at all Ticketmaster outlets.

JOHNNY WINTER is one of those guys you can quote great stats on forever.  Things like being listed by Rolling Stone magazine as one of the 100 Greatest Guitar Players of All Time or being inducted into the Blues Foundation Hall of Fame in 1988, or the fact that he and his brother Edgar played a full rocking set at the Woodstock Festival in 1969.  Little details like the fact that when he was growing up in Beaumont, Texas in the fifties his local deejay was The Big Bopper (JP Richardson) and he would go out to local clubs and, if they would let him, he could jump on the stage to play with the likes of  BB King.

From the fifties to the present day, the life of JOHNNY WINTER has been an integral part of the international blues scene, and he is one of the real influential links between southern American blues and the English blues/rock explosion of the late sixties and early seventies.  From the moment he released his debut self-titled album on Columbia records in 1969 JOHNNY WINTER became a musicians’ musician, a huge star and a rock god who set the standard of excellence for live shows.  He made it through the rock god phase, which included a fight with heroin addiction.  Unlike many from that era, he kicked the habit and lived to tell the story.

In his career JOHNNY WINTER has released twenty-six ‘official’ albums, the last two, The Woodstock Experience (Sony BMG Legacy) and The Johnny Winter Anthology (Shout! Factory) were both released in 2009.  One of Johnny’s great ambitions was to play with the blues icon Muddy Waters.  When he finally got his chance he did even better and ended up producing and playing on two albums with, and for, Muddy Waters, Hard Again (Blue Sky Records 1977) and I’m Ready (Blue Sky Records 1977), both of which won Grammy Awards and gave Mr. Waters the best financial success of his career.  The late, great Muddy Waters often referred to Johnny as  ‘his adopted son’ and perhaps that is what JOHNNY WINTER really is:  “The Son of The Blues.”

West coast bluesman DAVID GOGO, from Nanaimo BC, released his first of nine solo albums in 1994 and has become a fan favourite across North America and Europe with his blistering guitar licks and his soulful vocals.  He was named Musician of the Year at the Western Canadian Music Awards and Guitarist of The Year at the Maple Blues Awards. DAVID GOGO is a talented performer who loves to play live and is always a crowd favourite.

Classic Rock 101 and Rock.It Boy Entertainment in association with High tide Entertainment are proud to present blues legend JOHNNY WINTER in concert with special guest DAVID GOGO on Wednesday, September 15th at the Clarke Theatre located at 33700 Prentis Ave. in Mission (Ph 604-820-3961). Doors open at 7:00PM.  Show at 7:30PM. Tickets on sale Saturday July 10th for $45.50 (plus Facility Fee and Service Charges) at all Ticketmaster outlets (online at www.ticketmaster.ca or Charge-by-Phone at 604-280-4444).