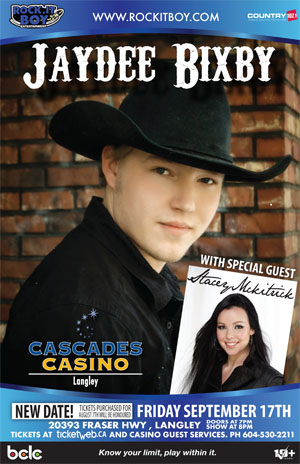 The show on Saturday, August 7th is postponed until Friday, September 17th

Tickets $22.50 (plus Facility Fee and Service Charges) at Ticketweb.ca and Casino Guest Services

There is a new date for the upcoming concert by JAYDEE BIXBY at the Cascades Casino in Langley.  The show has been postponed until Friday, September 17th and all tickets purchased for the previous date of Saturday, August will be honoured.