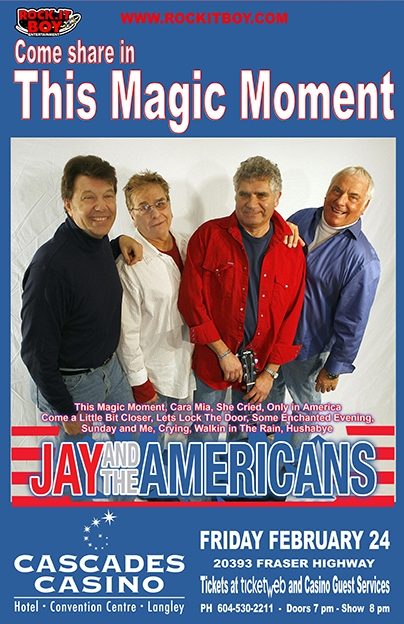 EXPERIENCE THIS MAGIC MOMENT!
WITH
JAY AND THE AMERICANS
Friday, February 24 at Cascades Casino Summit Theatre in Langley (604-530-2211)
Tickets $50.00 (plus Facility Fee and Service Charges) at www.ticketweb.ca and Casino Guest Services

Rock.It Boy Entertainment presents JAY AND THE AMERICANS, Friday, February 24 at the Cascades Casino Summit Theatre in Langley. Tickets are available for $50.00 (plus Facility Fee and Service Charges) at www.ticketweb.ca and from Casino Guest Services.

JAY AND THE AMERICANS were inducted into the Vocal Group Hall Of Fame (2002), placing them among the greatest vocal groups in Rock and Roll history.

Their journey began over 40 years ago, when four teenage boys got together in a Brooklyn basement and formed a group that would come to be known as JAY AND THE AMERICANS.

United Artists needed some music coverage to promote the movie West Side Story. JAY AND THE AMERICANS were signed and their first recording was entitled “Tonight”. Their breakout hit was “She Cried”, followed by “Only in America”, “Come a Little Bit Closer”, “This Magic Moment”, “Cara Mia”, “Crying” and “Some Enchanted Evening”. Their popularity continued to grow and they had an unparalleled 12 top ten records during the short time between 1962 and 1971.

“Sunday and Me”, Neil Diamond’s first hit song released, was recorded by JAY AND THE AMERICANS, who have toured with such renowned artists as Roy Orbison, The Beatles, and the Rolling Stones.

JAY AND THE AMERICANS were a major force in starting the Rock and Roll revival with their album Wax Museum (1970), paying tribute to many Rock and Roll greats with their versions of such songs as “Hushabye”, “There Goes My Baby”, “When You Dance”, and “Walkin’ in the Rain”.

Relive those fond memories of simpler, happy times as you enjoy all of these songs and more, during and evening with JAY AND THE AMERICANS.

For more information about JAY AND THE AMERICANS please visit www.jayandtheamericans.net

Rock.It Boy Entertainment presents JAY AND THE AMERICANS, Friday February 24 at Cascades Casino Summit Theatre located at 20393 Fraser Highway in Langley (phone 604-530-2211). Tickets are available for $50.00 (plus Facility Fee and Service Charges) from Casino Guest Services and at www.ticketweb.ca. Doors at 7:00 pm. Show at 8:00 pm.