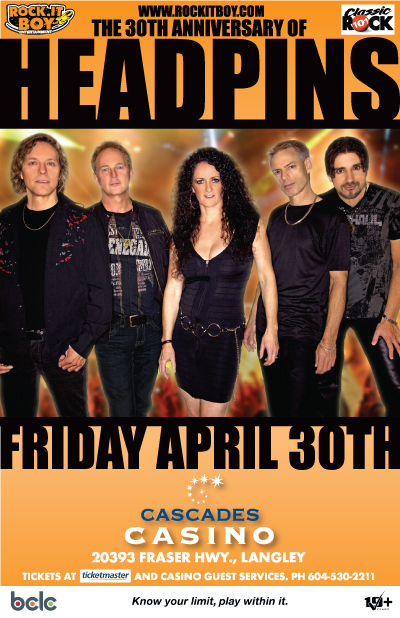 Tickets $27.50 (plus Facility Fee and Service Charges)  from Casino Guest Services and all Ticketmaster outlets.

ROCK 101 and  Rock.It Boy Entertainment present the return of Vancouver’s very own hard rocking, platinum-selling HEADPINS in concert on Friday, April 30th at the Summit Theatre in Cascades Casino  in Langley.  Tickets are on sale for $27.50 (plus Facility Fee and Service Charges) at Casino Guest Services and all Ticketmaster outlets.

HEADPINS, is a band that took the lacklustre eighties and kicked it up a notch setting a new standard for Canadian rock bands.  Their amazing ‘gimmick’ of high energy and well-written hard rock performed with intensity earned them double platinum, platinum and three gold records in Canada alone.

Started as a spin-off from CHILLIWACK by Brian ‘Too Loud’ Macleod and Ab Bryant, THE HEADPINS exploded from the Vancouver scene with the powerful vocals of the amazing diminutive dynamo Darby Mills out front, and the granite hard rhythm duo of Bernie Aubin and Alfie Galpin.  The first release, ‘TURN IT LOUD’ in 1982, went double platinum and contained the FM standard ‘Don’t It Make Ya Feel?’  The next two albums ‘LINE OF FIRE’ AND ‘HEAD OVER HEELS’ cemented the name HEADPINS as powerhouse rock music with vocals and guitars that could stand tall with the heaviest.

Brian Macleod, the popular man of volume and good times, lost his battle with cancer in 1992 and it took some years for the music and the fans to pull the band back to the old dance hall but since regrouping ,Bryant, Mills, Aubin and Galpin have really rocked with fresh intensity and their first two albums were re-released in 2000 and 2002.  Like a magnet the music drew towards itself the new guitar man, Tony D, with a slick, powerful sound that had already well-known for his work with Canadian hard rock staples Jerry Doucette and Lee Aaron.

Diminutive, strutting and flamboyant –  HEADPINS vocalist Darby Mills is renowned for her powerful screaming ‘growl’ and is often compared to Robert Plant (Led Zeppelin) and David Coverdale (Deep Purple) instead of other female songbirds. HEADPINS are the head instructors in Rampant Rock 101 – and school is in session. Make sure you catch them when they turn it loud!

ROCK 101 and Rock.It Boy Entertainment  present Canada’s hard rock legends HEADPINS in concert on Friday, April 30th at the Summit Theatre in  Cascades Casino, located at 20393 Fraser Highway in Langley (604 530 2211).  Tickets are on sale for $27.50 (plus Facility Fee and Service Charges) at Casino Guest Services and all Ticketmaster outlets (online at www.ticketmaster.ca or charge–by-phone at 604-280-4444).  Doors open at 7PM.  Show at 8PM.