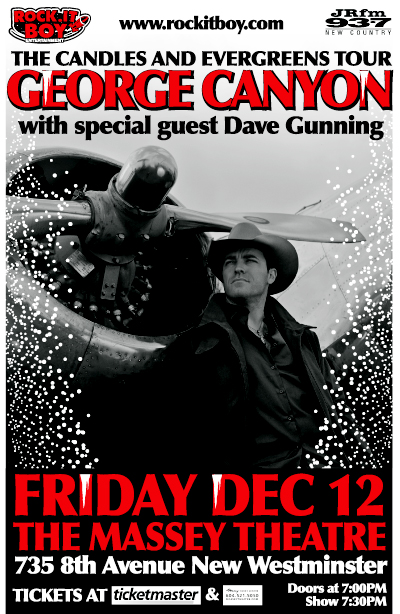 Tickets go on sale Saturday, October 11th for $32.50 (plus Service Charges) at all Ticketmaster outlets and The Massey Theatre Box Office.

Rock.It Boy Entertainment and JRFM are proud to present CANDLES & EVERGREENS featuring GEORGE CANYON with special guest DAVE GUNNING in concert on Friday, December 12th at the Massey Theatre located in New Westminster  (Ph 604-521-5050). Tickets go on sale for $32.50 (plus Service Charges) on Saturday, October 11th at all Ticketmaster outlets and The Massey Theatre Box Office. Since 2004 GEORGE CANYON has been making a splash on the country music scene with a number of awards, releases and chart-toppers. It was an overnight success fourteen years in the making, when he was thrust into the spotlight as runner-up in the USA Network/ CMT Canada television show Nashville Star and he has caught country music fans up in his whirlwind. Before his major label debut, One Good Friend (Universal Music 2004), he had supported his family with jobs that included law enforcement officer, slaughterhouse beef inspector and recording studio owner, all while performing on the side and producing two independent albums, Ironwolf (1996) and George Canyon (1999). One Good Friend shot to #1 on the Canadian Country charts its first week out and produced four singles in the top of the charts: “I’ll Never Do Better Than You,” “My Name,” “Who Would You Be” and “One Good Friend.” The album won dozens of awards across the country, including the 2005 Juno Award for Country Album of the Year.  Needless to say – George has not been back to the slaughterhouse for a while. He has been busy entertaining his fans across Canada and the US and has produced two more albums, Somebody Wrote Love (2006 Universal Music) which won another Juno Award and Classics (2007 Universal Music) which kicked off with a beautiful remake of the Johnny Cash classic “Ring of Fire.” Being a country music star is not really enough for GEORGE CANYON and he tirelessly donates his time to causes close to his heart and, at the 2008 Canadian Country Music Awards, he received the Humanitarian Award.   He has been extremely active with charitable organizations dealing with diabetes and juvenile diabetes. Diagnosed with the disease when he was fourteen, Canyon had to give up his life-long dream of becoming a pilot after learning the news, as diabetics could not pilot airplanes at that time. In 2006 he accompanied Canada’s Foreign Affairs Minister, Peter MacKay, on a trip to Kandahar in Afghanistan where he was able to meet with and perform for Canadian troops. His respect and admiration for the men and women of the Canadian Forces are evidenced in the songs “Letting Go” and “I Want To Live.”  On February 21st, 2008 GEORGE CANYON, the boy from Pictou County, was invested as an honorary Colonel of 14 Wing Greenwood in the Canadian Air Force in his home province of Nova Scotia, for his volunteer work and tireless support of our soldiers in the field. Rock.It Boy Entertainment and JRFM present ‘CANDLES & EVERGREENS’ featuring GEORGE CANYON with special guest DAVE GUNNING in concert on Thursday, December 12th at Massey Theatre located at 735 8th Avenue in New Westminster.  Tickets go on sale on Saturday, October 11th at all Ticketmaster outlets (online at www.ticketmaster.ca or Charge-by-Phone at 604-280-4444) and The Massey Theatre Box Office for $32.50 (plus Service Charges) or $37.50 at the door.  Doors open at 7PM with the show starting at 7:30PM GEORGE