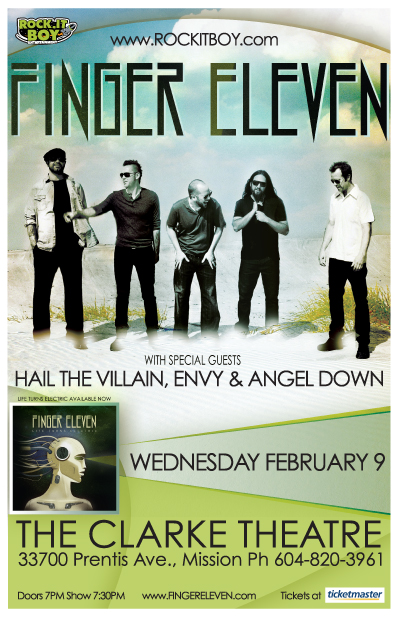 FINGER ELEVEN WITH HAIL THE VILLAN, ENVY & ANGEL DOWN

Angel Down added to THE Finger Eleven LINE-UP

Rock.It Boy Entertainment presents FINGER ELEVEN in concert with special guests, Hail The Villian, The Envy and ANGEL DOWN on Wednesday, February 9, 2011 at the Clarke Theatre in Mission. Advance tickets are on sale for $34.50 (Plus Facility Fees & Service Charges) at all Ticketmaster locations or $40 at the door.

FINGER ELEVEN is back and touring to promote the release of their fifth album. Life Turns Electric (Wind Up Records) is the pedal to the proverbial metal. Barreling headlong into the future but taking a scenic route through the dusty roads of the 70’s to get there. There’s nothing retro about it, but you can hear how they’ve inhaled the fumes of Classic Rock. The guitars are back, the melodies are strong and instantly memorable, branding the lyrics on your brain the very first time you hear them with tracks like “Living in a Dream,” “Any Moment Now,” and “Whatever Doesn’t Kills Me,” which is currently burning up the charts on Vancouver’s 99.3 The Fox.

Hail the Villain from Oshawa, Ontario came together in 2003 originally called Farenheit. The band members Bryan Crouch, Joseph Stamp, Drew Dockrill and Chad Taylor drew eclectic audiences with their unique brand of hard rock and heavy metal music. In early 2006, Farenheit changed their band name to Hail the Villain and in the spring of 2009 they signed a deal with Warner Music Canada. Their debut album Population: Declining, was released sometime in 2008 but re-released on Roadrunner Records in 2010 including the hit, “Take Back the Fear”.

The Envy a Rock Band originating from Toronto, Ontario was the first band signed to Gene Simmons’ record label Simmons Records. Not only was the band signed by Gene Simmons’ record label but they also toured across North America with Gene’s own band KISS on the “Hottest Show on Earth” tour in 2010. The band, consisting of; Shaun Frank, Vøid, Bodan Mulholland, Jonny Biggs and Izzy Centeno are currently touring to promote their upcoming album due early this year but for those who couldn’t wait…the band released their first single, “Don’t Let Go”, earlier this summer only available at shows and Itunes.

For more information on The Envy, please visit www.theenvymusic.com.

After sharing the stage with bands such as Econoline Crush and Melodic Blue, Angel Down is ready to take their music to the next level and just finished recording their debut album “Sundown”. These hard rockers are creating a typhoon in the music scene for their over-the-top stage show and their gritty, take-charge rock with harmonies and guitar riffs that carry through the crowd, they are sure to change the way you look at live music forever!

For more information on ANGEL DOWN, please visit www.reverbnation.com/angeldownrock.