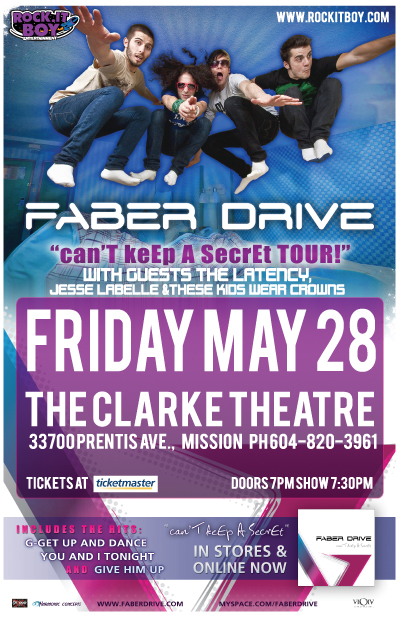 In concert Friday, May 28th – Clarke Theatre in Mission

This is going to be some show!  Rock.It Boy Entertainment has added a fourth band, the hot new electro-pop sensation THESE KIDS WEAR CROWNS, to the concert by  Mission’s very own FABER DRIVE with special guests JESSE LABELLE and THE LATENCY on Friday, May 28th at the Clarke Theatre in Mission.  Tickets are on sale for $25 (plus service charges) at all Ticketmaster outlets.

THESE KIDS WEAR CROWNS are six guys, Alex, Alan, Joe, Joshua, Josh and Matt, from across the lower mainland who are intent of becoming the six new kings of pop.  Their west coast style and catchy upbeat electro-pop sounds quickly earned them a spot on Season 2 of the MuchMusic reality show disBAND and everybody instantly fell in love with them.  The result: a record deal, recording sessions in Texas, touring Canada, a tour in the United States later this year and, just released, the video for the single “We All fall Down.” These Kids Are Here To Play And Here To Stay!

FABER DRIVE – all the way from Mission, BC and back again.  They went to conquer the world and are coming home with their second studio album Can’t Keep A Secret released six months ago on 604 Records, and the first single “G-get Up And Dance”  already gone platinum in Canada.  One of their very first fans was Chad Kroeger of Nickelback who signed them to his record label and the first studio album Seven Second Surgery (2007, 604 Records) yielded four singles including “Tongue Tied” and “When I Am with You” and the new album has already produced three infectious singles, the latest being the tight danceable “Give Him Up” and the power ballad “You and I Tonight.”

JESSE LABELLE has the uncanny ability to connect with people instantly. The song “Perfect Accident” from his debut solo album on Wax Records best describes his philosophy on life.  JESSE LABELLE’s happy-go-lucky ways, his storytelling, his love songs and his dimpled smile have captured the hearts of young Canadians who are lining up across the country to listen to him sing.

Another local act that is driving them wild at high schools across the country is THE LATENCY who first hit it big in 2008 with their independent single “Tonight I Love You,” from the EP CHOMP and released their self-titled debut album late last year on Maple Music Recordings.

Rock.It Boy Entertainment  presents FABER DRIVE with special guests JESSE LABELLE , THE LATENCY and THESE KIDS WEAR CROWNS in concert on Friday, May 28th at the Clarke Foundation Theatre located at 33700 Prentis Ave. in Mission (Ph 604-820-9361).  Tickets are on sale for $25 (plus Service Charges) at all Ticketmaster outlets (online at www.ticketmaster.ca or Charge-by-Phone at 604-280-4444) . Doors open at 7:00PM.  Show at 7:30PM.