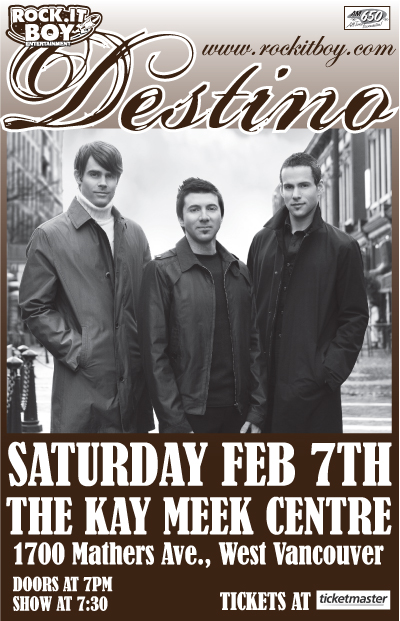 ‘POPERA WITH A SOUL INFUSION’

Tickets on sale December 12th – $37.50 (plus Service Charges) at Ticketmaster

‘All Time Favourites’ AM 650 is proud to present the swinging soaring sounds of DESTINO, Canada’s young ‘popera’ sensation, in concert on Saturday, February 7th at the Kay Meek Centre in West Vancouver.  Tickets go on sale on Friday, December 12th for $37.50 (plus Service Charges) at all Ticketmaster outlets.

In 2006, realizing they had strong chemistry both on- and off-stage, classically-trained, award-winning professional tenors Leon Leontaridis, Paul Ouellette and Joey Niceforo formed DESTINO after meeting and working together on another musical project. Before collaborating as a trio, the three Canadian vocalists were already well established with their solo careers, performing pop, opera, gospel, soul, R&B, jazz and musical theatre. And since starting their group DESTINO has received critical acclaim, and has been selling out concert halls in Canada and the U.S., with music that is best described as “popera” or “pop with an opera flair”.

Following their debut concert in Vancouver on July 8, 2006 and the release of an independently produced debut live CD they were signed to a recording and management deal. In the fall of 2007, the group released Christmas with DESTINO, featuring a collection of the members’ best-loved Christmas repertoire. This past summer, DESTINO released its debut commercial CD FORTE, a collection of classical and contemporary music, including Show Me the Way Back to Your Heart which was composed and recommended for DESTINO by Grammy award-winning songwriter Diane Warren.

DESTINO has toured extensively across Canada and the U.S. and performed at a number of private engagements, including Children’s Miracle Network fundraising concerts in Orlando and Las Vegas. The group has been affiliated with a number of non-profit charities including Kids Help Phone, World Vision, the ALS Society as well as Children’s Miracle Network.

Vancouver’s home of timeless hits, AM 650 presents DESTINO, the red hot trio of young Canadian tenors in concert on Saturday, February 7th at the Kay Meek Centre in West Vancouver.  Tickets will go on sale on Friday, December 12th for $37.50 (plus Service Charges) at all Ticketmaster outlets (online at www.ticketmaster.ca or Charge-by-Phone at 604-280-4444).  Doors open at 7PM. Show at 7:30PM.