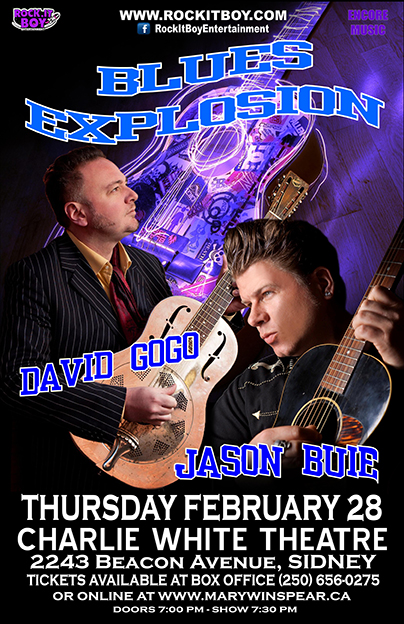 DAVID GOGO, one of Canada’s hardest working blues-rock guitarists has performed with such legends as B.B. KING, BO DIDDLEY, GEORGE THOROGOOD, ZZ TOP, and JOHNNY WINTER. Gogo electrifies the stage with sizzling, hard-rocking blues filled with heavy grooves, grit and emotion. Michael Jackson’s “The Way You Make Me Feel”, the Procol Harum nugget “Whisky Train”, the Doors’ under-appreciated “The Changeling”, “I Found a Love” by Wilson Pickett and Elmore James’ “Please Find My Baby” along with his originals and other works are all delivered with the quintessential Gogo twist.

An incredible showman with cutthroat wit and virtuosic blues guitar playing, DAVID GOGO delivers a blistering live performance. He has a string of remarkable accomplishments to show for it, earning three Juno Nominations for Blues Album of the Year (2003, 2007, 2012) , the Saturday Night Blues’ Great Canadian Blues Award for a lifetime contribution to the blues in Canada (2004), WCMA Musician of the Year (2000), WCMA Blues Recording of the Year (2012) and has two wins for Maple Blues Guitarist of the Year (2002, 2004). Art Tipaldi, Senior Writer, Blues Revue/BluesWax declares “Gogo distinguishes himself as not only a fiery guitarist, but also as a world-class slide player…..he is as soulful a singer as he is guitarist.” “David is a great blues player. I like his style!” says Johnny Winter. The Winnipeg Free Press concludes, “If there was a list of the best guitar players in Canada, David Gogo, would be on that list.”
For more information about DAVID GOGO visit www.davidgogo.com.

Guitarist, singer and songwriter, JASON BUIE has performed all over the world with such artists as blues legend BUDDY GUY, TAJ MAHAL, JEFF HEALEY, the late LUTHER ALLISON and ALBERT COLLINS. His heartfelt vocals and fiery guitar work are abundantly evident in such pieces as “Sleep All Day”, “I Don’t Want no Woman”, “I Believe to my Soul”, “Joe Louis” and “Mean Old World”. Jason’s CD “Urban Blues” is on regular rotation at Galaxy and affiliated satellite networks.

Since the release of his debut c.d JASON BUIE has received rave reviews around the world.
John Valentyn of The Toronto Blues Society states, “Buie has crafted a solid CD of modern electric blues. He does B.B., Albert, Ray, Hooker & T-Bone better than most. He’s a pretty good singer as well and the band is very solid.” Two of Jason’s songs have been featured on TV’s crime drama “Cold Squad”. A well-seasoned gumbo of blues, funk, rock and soul with a heaping helping of southern influences, the music of the charismatic JASON BUIE captures the attention of critics and blues fans alike.