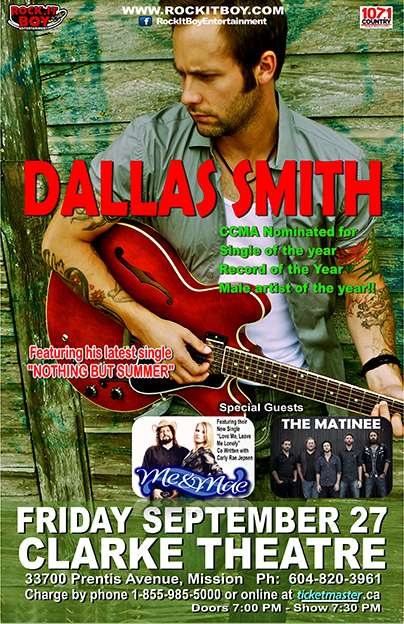 DALLAS SMITH WITH GUESTS THE MATINÉE AND ME & MAE

The Matinée, Me & Mae

ME & MAE added to the ticket

DALLAS SMITH
with guests THE MATINÉE

Friday, September 27 at the Clarke Theatre, 33700 Prentis Avenue, Mission. Tickets are $32.50 (Plus Facility Fee & Service Charges) available at all Ticketmaster locations.
Charge by phone at 1-885-985-5000 or online at www.ticketmaster.ca.

Rock.It Boy Entertainment and Country 107.1 proudly announce that ME & MAE will join DALLAS SMITH and THE MATINÉE on Friday, September 27 at the Clarke Theatre 33700 Prentis Avenue, Mission. Tickets are $32.50 (Plus Facility Fee & Service Charges) available at all Ticketmaster locations. Charge by phone at 1-885-985-5000 or online at www.ticketmaster.ca.

Rising country stars ME & MAE are fresh from a showcase performance during the CCMA Country Music Week in Edmonton and ready to take the stage!

ME & MAE is Shawn Meehan and Jacky Mae, BC’s newest country stars. On the road, this dynamic duo is spreading their high-energy sound to fans throughout the heartland of country music. With a blend of straight-up country influenced by the legendary Johnny Cash and Dolly Parton, the power country of Keith Urban and Carrie Underwood plus a Pop sensibility, ME & MAE have created a sound uniquely their own. Their signature sound and musical styling are evident in their new single, “Love Me, Leave Me Lonely” co-written by Carly Rae Jepsen.

Along with a busy touring schedule ME & MAE is hard at work on their debut album. With an alliance of world-class songwriting backed by an equally experienced group of musicians, it is certain to be a home run knockout. Listen for this superbly country duo on your local station and do not miss the opportunity to experience their enthusiastic and lively performance on stage.

For more information about ME & MAE visit www.meandmae.com
DALLAS SMITH, ten year veteran and front man of the successful Rock band Default, has stepped on over to the world of Country music. And what a successful step it has been! His debut album Jumped Right In immediately shot to the top of the Canadian Top 100 Neilsen Soundscan Chart, peaking at #19 and #4 on the Country Album Chart. An unprecedented five Top 10 singles, “Nothing but Summer”, “What Kinda Love”, “Jumped Right In”, “Somebody Somewhere” and “If It Gets You Where You Wanna Go”, have emerged from his first country music project. Such meteoric success is no coincidence. Rather, it is the result of genius collaboration with acclaimed songwriter/producer Zac Maloy, Grammy nominated songwriter Rodney Clawson, Chris Tompkins and Joey Moi, Nashville’s biggest and brightest.

To Dallas, country music has always been about the “special combination of voice and song.” He says, “I’ve always chosen and written songs with challenging vocals that I love to sing.” That credo has landed DALLAS SMITH in the middle of the 2013 CCMA Awards. He will perform live at the awards show where he will also anticipate the outcome of his three nominations for Album of the Year, Male Artist of the Year and Single of the Year. This is sure to be a landmark concert for this shooting star.

Shoot out the lights, and stone the roses, what we hear is THE MATINÉE, a band whose five members have known each other since high school. One part roots, one part rock, one part whiskey, and one part party – definitely shaken, not stirred – they have a groove a mile wide. Sparkling down-country guitar work, bass in spades, drums that take the listener into the outer reaches and attention to exquisite vocal harmony exist ubiquitously in the southern rock redux of “Sweetwater” and “Let Her Go”, the starlit “December Slumber”, the anthem “The Road” in addition to the instant classic “Young & Lazy”.

Driven to be as great as possible, THE MATINÉE earned a third place win in the 2011 Peak Performance Project. Eager to colour outside the lines, the band finds itself in the rare position of being welcome at both rural festivals and the urban hipster ground zero of your choice. After years of roadwork and growth, playing everywhere from prisons to air force bases and every watering hole in between, THE MATINÉE delivers an explosive live show renowned for its uproar of stomping, clapping, and blazing chops. It is abundantly clear these guys are taking the “Long Way Home”!

For More information on THE MATINÉE please visit: thematineemusic.com.

Rock.It Boy Entertainment and Country 107.1 proudly present DALLAS SMITH with guests THE MATINÉE AND ME & MAE on Friday, September 27 at the Clarke Theatre 33700 Prentis Avenue, Mission. Tickets are $32.50 (Plus Facility Fee & Service Charges) available at all Ticketmaster locations. Charge by phone at 1-885-985-5000 or online at www.ticketmaster.ca. Doors 7:00PM. Show 7:30PM.