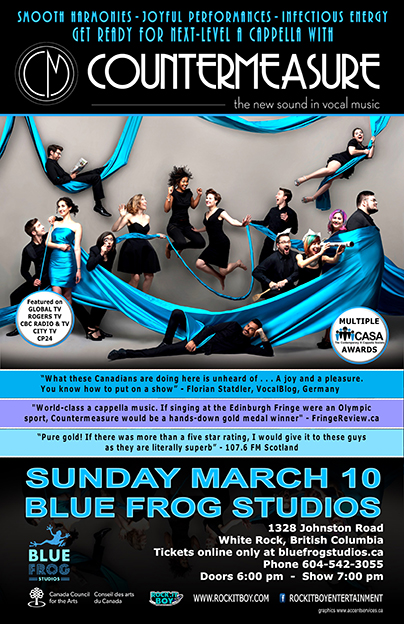 Get ready for next-level a cappella with COUNTERMEASURE! With smooth harmonies,joyful performances andinfectious energyCountermeasure has earned standing ovations and critical acclaimworldwide. Featuring 12 of Canada’s top vocal talents led by award-winning composer/arranger Aaron Jensen, the group has shared stages with a cappella giants including Naturally 7, The Swingle Singers and top 40 stars like CoreyHart and Blue Rodeo. They perform innovative arrangements of pop favourites and classic jazz standards, including “I’ve Got You Under My Skin”, “Lovers in a Dangerous Time”, “I’m Gonna Be (500 Miles)”, and “ Hit Me Baby One More Time”, and original songs “London Bells”, “Takin’ it Home”, “Life is Fine”, “Fox in the Field”, and more. Their diverse songbook has equipped the group to headline international choral concerts, play the main stage at jazz festivals and entice club-goers onto the dance floor.

COUNTERMEASURE has won multiple awardsfrom Contemporary A Cappella Society of America includingBest Contemporary A Cappella Album for “Made to Measure” (2017), Best Electronic/ExperimentalVideo and Best CAL Video (runner up) for “Opera Somnia” (2017) and a tie with Pentatonix for Best Original Song – “Fox in the Field” (2017). The videos for their original songs, “Life is Fine” and “Fox in the Field”, from their latest album release, “Made to Measure”, have nearly 500,000 YouTube views.

In addition to providing the live soundtrack to Canadian National Film Board shorts, Countermeasure can be found on CBC Radio and TV, Global Television, Rogers Television, City TV, and CP24. They are also a founding artist of SING! The Toronto Vocal Arts Festival, Canada’s premier a cappella festival, and the new SING! BC. They have wowed audiences from Japan to New York City with concerts at the Kennedy Centre and Koerner Hall, Toronto’s Beaches International Jazz Festival, the London a Cappella Festival (UK), Edinburgh Festival Fringe and the world-renowned Vocalmente Festival in Italy.

FringeReview.ca declares, “A stunning hour of world-class a cappella music.If singing at the Edinburgh Fringe were an Olympic sport,Countermeasure would be a hands-down gold medal winner.”
Florian Statdler, VocalBlog, Germany concludes, “I have seen 100s of a cappella shows but what these Canadians are doing here at #LACF is un heard of. What a joy and a pleasure. You nail those speeches, you sing so beautifully, & you know how to put on a show.”
And, East Coast 107.6 FM Scotland raves, “55 minutes of pure gold! If there was more than a five star rating, I would give it to these guys as they are literally superb!”