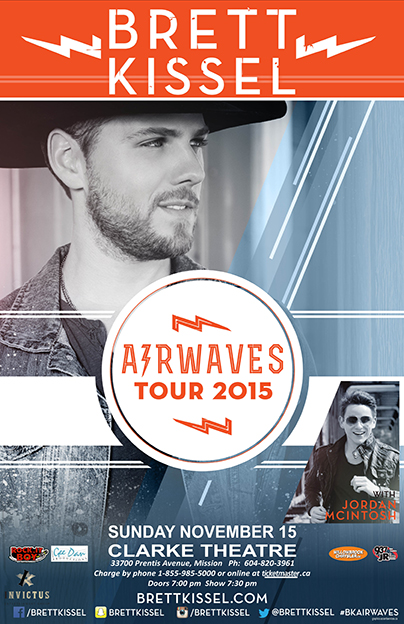 It all Started With A Song

Sunday, November 15 at the Clarke Theatre in Mission. Tickets are $37.50
(Plus Facility Fee & Service Charges) available at all Ticketmaster locations.
Charge by phone at 1-885-985-5000 or online at www.ticketmaster.ca.

BRETT KISSEL is an honest to goodness country boy, raised on a cattle ranch that has been in his family for over a century. It seems he was born with the passion and the talent for pickin’ and singin’, from tearing it up at talent shows from the age of 10 to taking the stage as the frontrunner in the New Wave of Old Country. THE country music story of 2014, Kissel is not to be ignored. “Started With A Song”, the title track from his debut album, swept the record for most adds at Canadian Country radio in one week, eclipsing Taylor Swift. The smooth, classic sound comes through loud and clear on the outstanding “Something You Just Don’t Forget”, “3-2-1”, “Country In My Blood”, “Together (Grandma and Grandpa’s Song)”, “Girl In A Cowboy Hat” and his latest single “Airwaves”.

It’s a good thing Brett has roots planted deep in the Alberta soil, because the parade of awards just keep coming. With 8 nominations to his credit, he won the Canadian Country Music Association Awards for CMT Video of the Year and Interactive Artist of the Year (2014). Brett also took home a Canadian Radio Music Award for Breakthrough Artist of the Year in Country Music (2014) in addition to 2 Association of Country Music in Alberta awards, and 2 Edmonton Music Awards. Perhaps the jewel in the crown is his first Juno Award, becoming the first country artist to be awarded with Breakthrough Artist of the Year (2014) in 17 years. He has seen 2 of his music vides reach No. 1 at CMT, he has scored three Top 10 radio hits, and he has headlined a cross-Canada tour with countless sold out shows across North America.

Through it all, the energetic and electrifying 24 year old BRETT KISSEL is keeping it real, remembering that it all “Started With A Song”
For more information about BRETT KISSEL visit: www.brettkissel.com

JORDAN MCINTOSH grew up listening to Brooks and Dunn, Garth Brooks and Dwight Yoakam, taking different things from a lot of different artists. With the firm belief that every Country song tells a story, he wanted to write something that paid respect to where he’s from. Drawing on a wide range of influences this young man lays out his stories like a series of lyrical snapshots from a classic country tune. “Grew Up In A Country Song”, the first single from his forthcoming debut album delivers it all in spades, as do the tracks “That Girl”, “Story Of My Life”, “Let Me Love You”, “Walk Away” as well as his countrified version of Lil’ Wayne’s “How To Love”.

With a voice and a depth of emotion well beyond his years, JORDAN MCINTOSH is a natural born performer with stage presence to spare. Fearless and focused on stage, he has performed at a variety of talent and singing contests across Ontario and the United States. Among them, the Ottawa Super Ex Stars On The Rise Competition (2011) and Walt Disney World’s American Idol Experience, where he’s taken first place three times, most recently in 2010. In addition, the 2013 release of the video for “Grew Up In A Country Song” earned him the title of Fresh Face Feature Artist on CMT Canada. Jordan also appeared in the CMT video Home For Christmas alongside George Canyon, Aaron Pritchett and One More Girl. Not bad for a young man juggling a burgeoning music career with his senior year of high school!