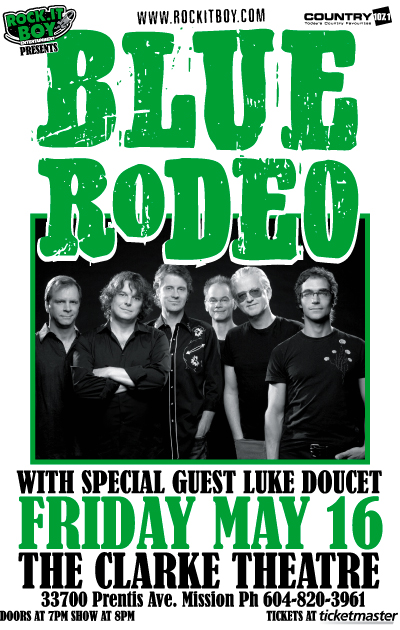 Treat yourself to a night of quality Canadian country music as COUNTRY 107.1 FM and Rock.It Boy Entertainment present BLUE RODEO in concert on Friday, May 16th at the Clarke Theatre, 33700 Prentis Ave. in Mission.  Advance tickets are available at all Ticketmaster outlets for $49.50 (plus Service Charges)

BLUE RODEO was started in high school when guitarist/vocalists Jim Cuddy and Greg Keelor got together. Blooming in the post-punk Queen Street scene in Toronto in the 80’s where the world seemed eager for their sound, BLUE RODEO released their debut album Outskirts in March 1987. There have been ten more studio albums since then, two live albums and a greatest hits collection, which have sold in excess of 3 million copies around the world.

Their latest album Small Miracles was released in 2007 and the band took to the streets of Toronto as buskers to promote the latest singles “This Town” and “3 Hours Away.”  They have won pretty much every award a band can win in Canada, including 7 Juno Awards, and in the fall of 2001, they were presented with the key to the city of Toronto (their home town) as an acknowledgment of their success around the world and their work as Ambassadors of Canadian culture.

BLUE RODEO is ‘by far and away’ Canada’s most popular roots rock band, crossing boundaries from FM rock to country to pop, and has become a veritable institution because of their honest sound, gifted song writing skills and absolutely awe inspiring live performances. Expect to hear hits like “Try,” “Till I Am Myself Again,” “Already Gone,” “Head Over Heels,” “Lost Together” and many more.