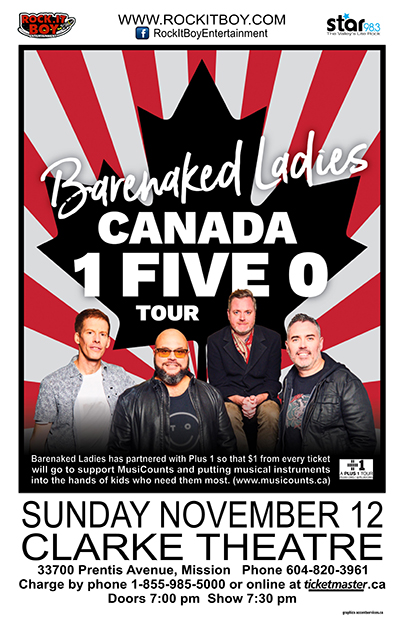 The Clarke Theatre in Mission Sunday, November 12.
Tickets are $80.00(plus Facility Fee & Service Charges) at all Ticketmaster locations.
Charge by phone at 1-855-955-5000 or online at www.ticketmaster.ca.

Rock.It Boy Entertainment presents BARENAKED LADIES: THE CANADA ONE-FIVE-OH TOUR on Sunday, November 12 at the Clarke Theatre, 33700 Prentis Avenue, Mission. Tickets are $80.00 (plus Facility Fee & Service Charges) available at all Ticketmaster locations. Charge by phone at 1-855-955-5000 or online at www.ticketmaster.ca.

Don’t miss your chance to see BARENAKED LADIES as they head to Mission!

“Gotta see the show, ‘cause then you’ll know,” sings Ed Robertson on BARENAKED LADIES’ chart-topping hit, “One Week”, a song featured on the band’s most recent live album “BNL Rocks Red Rocks”, recorded at the fabled Morrison, CO, Amphitheater on June 10, 2015 during the band’s Last Summer On Earth tour.

That’s as good a description as any about seeing these rock icons in concert, an experience filled with the kind of energy, precision, finesse and outright celebration among its fans that is a tribute to BARENAKED LADIES’ remarkable longevity. The band is still together after nearly three decades, producing 14 studio albums which have collectively sold more than 14 million copies, won eight Juno Awards, earned multiple Grammy nominations, a U.S. chart-topping single (“One Week”) and the theme song to one of TV’s most popular shows, The Big Bang Theory.

“I don’t think there’s a secret,” Robertson explained to People magazine last year when asked how BNL managed to not just survive, but thrive, continuing to sell out venues wherever they go. “It’s work. You’ve got to respect each other, you got to give each other space, but you also have to support each other… This band learned early on to communicate, right from the beginning we didn’t want to burn out. We wanted to keep making music.”
“We appreciate what we do more than ever,” explains Robertson. “We’re not looking for external validation. We’re enjoying working together and we’re doing some of the best shows of our entire career.”

“I still love writing songs,” insists Robertson. “And it’s such a privilege to work with these guys. They have my back, and I have theirs. It’s pretty amazing to watch the crowd light up when we play a song we recorded 25 years ago, and then hear them sing along with something brand-new.”

“Our fans have been on this journey with us, so we’ve kind of grown up together,” says Ed. “It’s a special relationship, within the band and between our fans. Every band says they have the best fans, but we actually do. And we know that because other bands tell us that.”

“It’s not easy to be hyperactive, brooding and whimsical all at once,” the New York Times pop critic Jon Pareles once wrote about BNL. “But the Barenaked Ladies do just that.”

BARENAKED LADIES have most recently announced a very special collaboration with the legendary “Kings of A Cappella” The Persuasions, with an album titled, “Ladies And Gentlemen: Barenaked Ladies And The Persuasions” to be released April 14, 2017. The album features 14 tracks re-imagined BNL’s award-winning catalogue and the classic ‘Good Times’. BNL recorded the album live off the floor with The Persuasions in the Fall of 2016 in Toronto.

BARENAKED LADIES has partnered with Plus1 so that $1 from every ticket goes to support MusiCounts (www.musicounts.ca), putting musical instruments into the hands of kids who need them most.