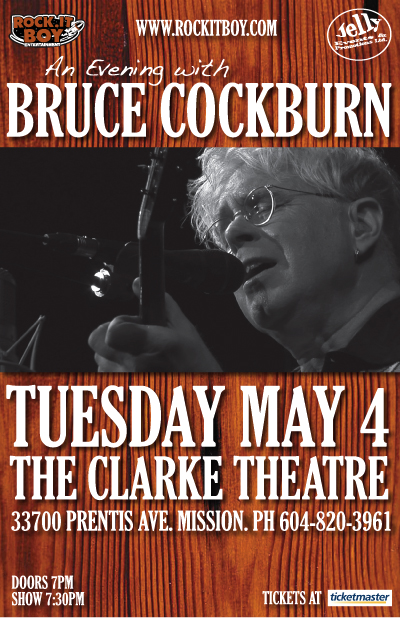 AN EVENING WITH BRUCE COCKBURN

An Evening with Bruce Cockburn Links

AN EVENING WITH BRUCE COCKBURN

In concert Tuesday, May 4th – Clarke Theatre in Mission

Tickets on sale Saturday March 6th for $39.50 (plus Service Charges) at all Ticketmaster outlets.

Rock.It Boy Entertainment in association with Jelly Events  are  proud to present legendary Canadian singer, songwriter, guitar virtuoso BRUCE COCKBURN in concert on Tuesday, May 4th at the Clarke Theatre in Mission.  Tickets are on sale starting Saturday March 6th for $39.50 (plus Service Charges) at all Ticketmaster outlets.

BRUCE COCKBURN has been writing, recording and performing for thirty-five years, sometimes as a man with a guitar on his own, other times fronting touring bands made up of some of the finest musicians available.  He has released twenty-three studio albums and four live albums, the latest being Slice O Life – Live Solo (True North Records 2009), a double CD featuring Bruce on his own without a backing band, covering all of his songs.

Slice O Life ranges from the controversial “If I Had a Rocket Launcher,” his classic “Lovers in a Dangerous Time” and his breakthrough “Wondering Where the Lions Are,” which he rightly quips may be the only song ever to make the Billboard chart that includes the word “petroglyph”. This exactly what you can expect from him every night.

Performing his material without a band just highlights what a virtuoso performer BRUCE COCKBURN is when standing alone with a guitar, which is why Acoustic Guitar magazine placed him in the esteemed company of Andrés Segovia, Bill Frisell and Django Reinhardt.  A humble man with strong commitments to disadvantaged citizens of the world, BRUCE COCKBURN has earned twenty Gold and Platinum awards in Canada, was inducted into the Canadian Music Hall of Fame in 2001 and was made an Officer of the Order of Canada in 2002.

Rock.It Boy Entertainment in association with Jelly Events present the great Canadian singer/songwriter BRUCE COCKBURN in concert on Tuesday, May 4th at the Clarke Theatre located at 33700 Prentis Ave. in Mission (Ph 604-820-3961).  Tickets are on sale Saturday March 6th for $39.50 (plus Service Charges) at all Ticketmaster outlets (online at www.ticketmaster.ca or Charge-by-Phone at 604-280-4444). Doors open at 7:00PM.  Show at 7:30PM.