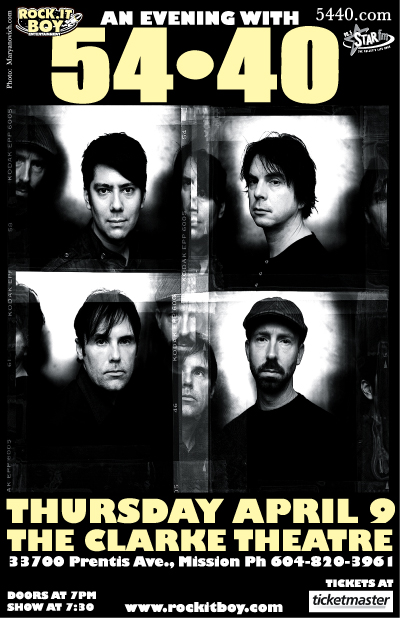 Tickets go on sale January 16th – $22.50 (plus Service Charges) at all Ticketmaster outlets

Rock.It Boy Entertainment presents An Evening With 54•40 on Thursday, April 9th at the Clarke Theatre, 33700 Prentis Ave. in Mission.   Tickets go on sale on January 16th at all Ticketmaster outlets for $22.50 (plus Service Charges) 54•40 is one of the most important popular music groups to emerge from the Canadian cultural landscape. With twenty-three years of recordings behind them, the band has an unbelievable catalogue of hit songs. Lead by chief songwriter Neil Osborne, 54•40 has carved out a legacy of gold and platinum albums and achieved an outstanding reputation for live performances that carries through to this day. They first launched into the west coast punk rock/new wave scene in 1981, playing their first ever gig on New Years Eve at the Smilin’ Buddha Cabaret – a long-gone punk rock club on the downtown eastside. In 1986 they released their self-titled debut major label album which featured the classic signature tracks “I Go Blind” and “Baby Ran”.  From there 54•40 remained consistently prolific, releasing albums such as Show Me, Fight For Love, Dear Dear, Smilin’ Buddha Cabaret and more. And the new material remains just as vibrant today as it was back then. The band released their latest album Northern Soul (True North Records 2008) a couple of months ago and, if you haven’t seen it yet, check out the animated video for the title track on their Facebook profile.  Some things don’t change with this band.  After all these years 54•40 still manages to write toe-tapping songs with harmonies that soothe the soul while at the same time bringing up hard questions about the qualities of existence and war. Along with their incredible songwriting ability, the members of 54•40 expanded their horizons by opening their own studio. Neil Osborne produced Juno nominated Jets Overhead and Winnipeg singer songwriter Cara Luft, while guitarist Dave Genn produced up and coming rock bands Marianas Trench, Arm Chair Cynics and is a co-songwriter for the chart topping Hedley.  54•40 is a band that loves to perform and lives to entertain. Expect to hear some of the new songs from Northern Soul and many of the classics like “One Gun”, “One Day In Your Life”, “She La”, “Ocean Pearl”, “Love You All,” “Baby Ran,” and more. Rock.It Boy Entertainment presents An Evening With 54•40 on Thursday, April 9th at the Clarke Theatre, located at 33700 Prentis Ave. in Mission (Ph 604-820-9361).  Tickets go on sale on January 16th for $22.50 (plus Service Charges) at all Ticketmaster outlets (online at www.ticketmaster.ca or Charge-by-Phone at 604-280-4444).  Doors open at 7:00PM and the show will begin at 7:30PM.