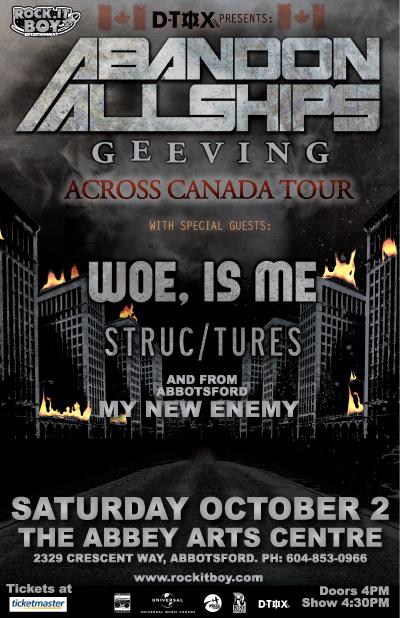 ABANDON ALL SHIPS, WOE, IS ME, STRUC/TURES and MY NEW ENEMY

Woe Is Me, Struc/Tures, My New Enemy

ALL AGES SHOW with 4 HARD BANDS

ABANDON ALL SHIPS, WOE, IS ME, STRUC/TURES, MY NEW ENEMY

Tickets on sale $17.50 (plus Facility Fee and Service Charges) at all Ticketmaster outlets

Are you looking for Saturday afternoon of hard pounding music, intense vocals and double kick drums all the way?

Rock.It Boy Entertainment presents a 4-BAND ALL AGES SHOW featuring the hardcore/Euro sound of ABANDON ALL SHIPS with WOE, IS ME and special guests STRUC/TURES and local lads MY NEW ENEMY in an early concert at 4:30PM on Saturday, October 2nd at the Abbey Arts Centre in Abbotsford. Tickets are on sale for $17.50 (plus Facility Fee and Service Charges) at all Ticketmaster outlets.

Toronto-based six-piece hardcore/Euro outfit ABANDON ALL SHIPS is doing what they have done since grade eight in high school – they are giving it every thing they’ve got, and right now they have got a lot going their way.  They released their debut self-titled EP in 2009, getting massive hits on Myspace plus a whole lot of great exposure from the MuchMusic show disBAND and, by early 2010 they were signed to Underground Operations, Rise Records and Velocity Records.  Their debut album Geeving (a ‘guido’ word meaning I don’t give a ****“) is set for release this October and the powerful debut single and video “Take One Last Breath” was released this summer, hitting #5 on the Canadian Rock Charts.

The other newly signed band in the Velocity/Rise records stable of powerhouse young talent is the metal core machine WOE, IS ME, seven guys from Atlanta, Georgia that can set it up, break it down and blow you away.  Their debut album Number(s) was released at the end of August and has already charted at #16 on the Billboard Top Heatseekers in the US.

STRUC/TURES bring progressive metal from the deepest metal mines of dark Toronto and, with only one EP under their collective belt, they have earned their spot on this cross-Canada tour because they put on an undeniable and unavoidable live show that converts fans and leaves audiences hungry for more.

Abbotsford’s own  MY NEW ENEMY is already well known to local hardcore aficionados and party monsters as they have become a popular and solid addiction to the most intense concerts around Vancouver.

Rock.It Boy Entertainment presents a supremely powerful 4-BAND ALL AGES SHOW featuring ABANDON ALL SHIPS with WOE, IS ME, STRUC/TURES and local lads MY NEW ENEMY in concert on Saturday, October 2nd at the Abbey Arts Centre, 2329 Crescent Way in Abbotsford (604-853 0966). Tickets are on sale for $17.50  (plus Facility Fee and Service Charges) at all Ticketmaster outlets (www.ticketmaster.ca or charge–by-phone at 604-280-4444). The doors open at 4:00PM with the show starting at 4:30PM.